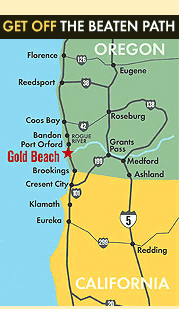 Gold Beach is within Oregon's "banana belt", a narrow stretch of latitude that experiences unusually mild weather all year long. The summer and winter mean temperatures differ by only about 10 degrees F. June through August temperatures average 58.3 degrees F while December through February temperatures average 47.7 degrees F. Average rainfall is about 80", most of which occurs in the winter. Summer months are mostly dry.

Gold Beach gets it's name from the fact that gold was discovered along the black sands of the beaches near the mouth of the Rogue River in the early 1850's. The settlement of miners shortly became known as Ellensburg. The name was changed to Gold Beach in Pot of Gold 171890, but the stretch of highway 101 that runs through Gold Beach is still named Ellensburg Avenue. Commercial fishing became a major industry in the 1850's. In the 1890's, sail and pole powered boats began taking mail to the small towns upriver. Eventually, these boats were motorized and began taking passengers. Now, these boats carry close to 60,000 tourists annually, and they still deliver the mail.

The Isaac Lee Patterson bridge was built in 1931 with it's completion in January of 1932. It spans 1939 feet across the Rogue River. At that time, it was the most advanced concrete bridge in America and is now designated by the American Society of Civil Engineers as a National Historical Engineering Landmark.